Cross-posted from Moon of Alabama.

Tomorrow [Sunday] a new trade agreement between 15 Asian states will be signed. It will soon be seen as a milestone in global economic history. But only very few ‘western’ media have taken note of it or of the huge consequences the new agreement will have.

The agreement is also a huge victory for China over U.S. hegemony in Asia:

The Regional Comprehensive Economic Partnership (RCEP) is expected to be announced at the Association of Southeast Asian Nations (ASEAN) Summit, which Vietnam is hosting virtually. It will involve the ten member states of the ASEAN bloc – Brunei, Cambodia, Indonesia, Laos, Malaysia, Myanmar, the Philippines, Singapore, Thailand and Vietnam – as well as their trade partners Australia, China, Japan, New Zealand, and South Korea.

The new economic bloc will thus represent around a third of the world’s gross domestic product and population.

The economies of the RCEP members are growing faster than the rest of the world. The agreement is likely to accelerate their growth. 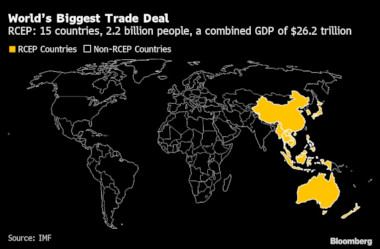 India is the only country that was invited but is missing in the deal. Its Hindu-fascist Modi regime had bet on the U.S. led anti-Chinese QUAD initiative pressed for by Trump and Pompeo and thereby lost out in trade terms:

Prime Minister Narendra Modi’s remarks at the 17th ASEAN-India Summit on November 12 makes sad reading. It comes in the specific context of the signing of the Regional Comprehensive Economic Partnership [RCEP] on Sunday — the mega free trade agreement centred on the ASEAN plus China, Japan and South Korea.

Modi avoided mentioning RCEP, although it signifies a joyful occasion in ASEAN’s life as much as Diwali is for an Indian. He instead took detours — ‘Make in India’, ‘Act East Policy’, ‘Indo-Pacific Oceans Initiative’, ‘ASEAN centrality’.
…
To be sure, RCEP heralds the dawn of a new post-Covid regional supply chain. As a new RCEP supply chain takes shape, India has not only excluded itself but is unwittingly facilitating its “arch enemy” China to become the principal driver of growth in the Asia-Pacific.

On the other hand, extra-regional economic ties cease to be a priority for the ASEAN, in relative importance. There isn’t going to be any takers in the Asia-Pacific region for even a partial US-China “decoupling”. The RCEP is in reality an ASEAN-led initiative, which is built on the foundation of the six ASEAN+1 FTAs and it secures ASEAN’s position at the heart of regional economic institutions.

The U.S. Pivot to Asia, launched under the Obama administration, as well as the anti-Chinese ‘decoupling’ initiatives by the Trump administration have thereby failed…