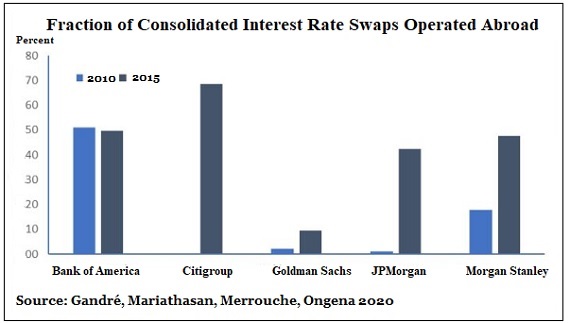 On May 30, with little mainstream media attention, four European academics published a report on how some of the largest Wall Street banks (all of whom received massive amounts of secret Federal Reserve bailout money during the 2007 to 2010 financial crash) were shamelessly gaming the system again.

Rather than complying with the derivatives regulations imposed under the Dodd-Frank financial reform legislation of 2010, the Wall Street mega banks had simply moved much of their interest rate derivatives trading to their foreign subsidiaries that fall outside of U.S. regulatory reach. This is known as regulatory arbitrage: seeking the most lightly regulated jurisdiction to ply your dangerous trading activity. (Think JPMorgan’s London Whale fiasco.)

The researchers discovered that “US banks reduced their [derivative] holdings at home, while increasing them in Australia, Japan, the UK, Brazil, China, Hong Kong, and Mexico.”

During the last financial crisis, Citigroup received the largest bailout in global banking history, grabbing $45 billion in capital from the U.S. Treasury; over $300 billion in asset guarantees from the federal government; the Federal Deposit Insurance Corporation (FDIC) guaranteed $5.75 billion of its senior unsecured debt and $26 billion of its commercial paper and interbank deposits; and the Federal Reserve secretly made a cumulative $2.5 trillion in below market interest rate loans to Citigroup from 2007 through at least the middle of 2010, according to an audit by the Government Accountability Office (GAO).

According to documents released by the Financial Crisis Inquiry Commission (FCIC), at the time of Lehman Brothers’ bankruptcy on September 15, 2008, it had more than 900,000 derivative contracts outstanding and had used the largest banks on Wall Street as its counterparties to many of these trades. The FCIC data shows that Lehman had more than 53,000 derivative contracts with JPMorgan Chase; more than 40,000 with Morgan Stanley; over 24,000 with Citigroup’s Citibank; over 23,000 with Bank of America; and almost 19,000 with Goldman Sachs. These are the same Wall Street mega banks shown on the chart above that are now evading Dodd-Frank derivative rules by moving large amounts of their opaque derivative trades to their foreign subsidiaries.

Another chart from the Financial Crisis Inquiry Commission that will take your breath away shows the derivatives casino that Goldman Sachs had become by June of 2008. The figures are simply staggering. In the most dangerous form of derivative, credit derivatives, Goldman Sachs had $5.1 trillion notional (face amount) exposure. And almost all of its counterparties were being propped up by the Federal Reserve’s secret revolving loans. In the case of Merrill Lynch and Morgan Stanley, where Goldman had more than $600 billion exposure to each counterparty, the Fed made $2 trillion in secret, cumulative, below-market rate loans to each firm, according to the GAO audit.

Because of the pivotal role that derivatives played in the Wall Street collapse of 2008, which spawned millions of foreclosures and job losses across the U.S., the Dodd-Frank financial reform legislation was supposed to prevent insured depository banks from holding these dangerous derivatives. One derivatives reform measure was known as the “push out rule,” where derivatives would be pushed out of the insured bank to a different part of the bank holding company that could be wound down without taxpayer support if the bank became insolvent. But before that rule ever took effect, Citigroup engineered its repeal…