By mistake, the U.K. recently revealed the budget size of a multibillion-pound program that it manages to support the royal family’s de facto protection force, which is also active in the devastating war in Yemen.

By Matt Kennard and Mark Curtis, and cross-posted from Consortium News.

The U.K.’s Ministry of Defence has mistakenly admitted for the first time the budget size of a multibillion-pound program it manages for the Saudi Arabian royal family’s de facto protection force, which is also active in the devastating war in Yemen.

It can also be revealed that this program, which is embedded in the U.K.’s Ministry of Defence (MOD) but paid for by the Saudi regime, employs 10 times more people than the British government publicly admits, raising questions about ministers misleading the parliament in Westminster.

The Saudi Arabia National Guard Communications Project (known as Sangcom) has operated since 1978, when the British government signed a memorandum of understanding (MOU) with the authorities in Riyadh. The project provides military communications equipment to the Saudi Arabian National Guard (SANG) but the MOU, which is itself secret, stipulates complete secrecy on the budget.

In July this year, however, the MOD advertised for the position of a Sangcom project manager based in Riyadh. The job was open only to male applicants and the advert stated: “The UK MOD SANGCOM Project Team is responsible for the delivery of a £2bn programme to modernise the Saudi Arabian National Guard’s communications network.” 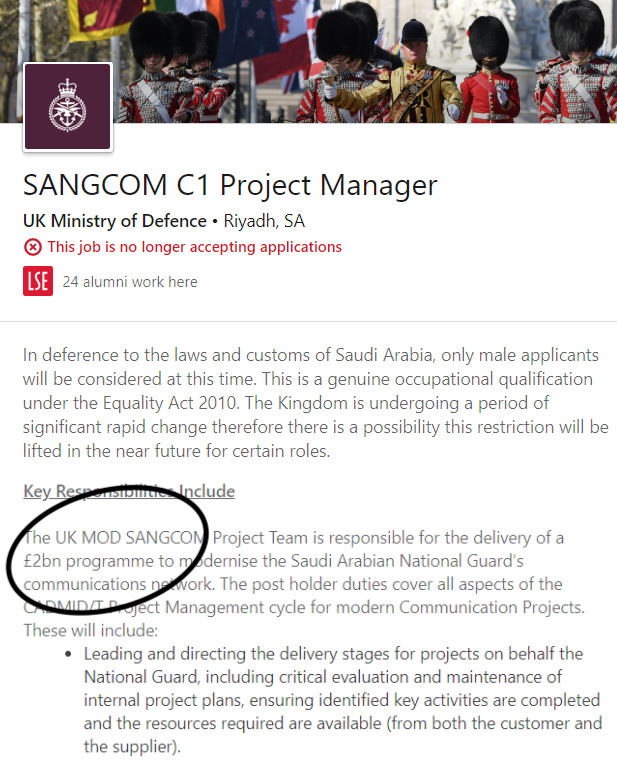 This is the MOD’s first public acknowledgement of the size of Sangcom’s budget in its 40-year history and such a casual mistake is likely to infuriate its Saudi counterparts. As recently as March 2019, Labour MP Catherine West asked a parliamentary question about the program’s budget and was told that it is “confidential to the two governments.”

It is understood that this £2-billion budget runs for 10 years and was agreed in February 2010. This new phase of the Sangcom project is 15 times larger than the previous agreement, worth £124-million and signed in 2004…