Distracted by Hong Kong social unrest and focused on yield curve inversions and negative yields worldwide, it is not surprising the ‘average joe’ investor is missing the real forest fire for the trees.

Distracted by Hong Kong social unrest and focused on yield curve inversions and negative yields worldwide, it is not surprising the ‘average joe’ investor is missing the real forest fire for the trees.

With almost $17 trillion in global debt now yielding below zero… 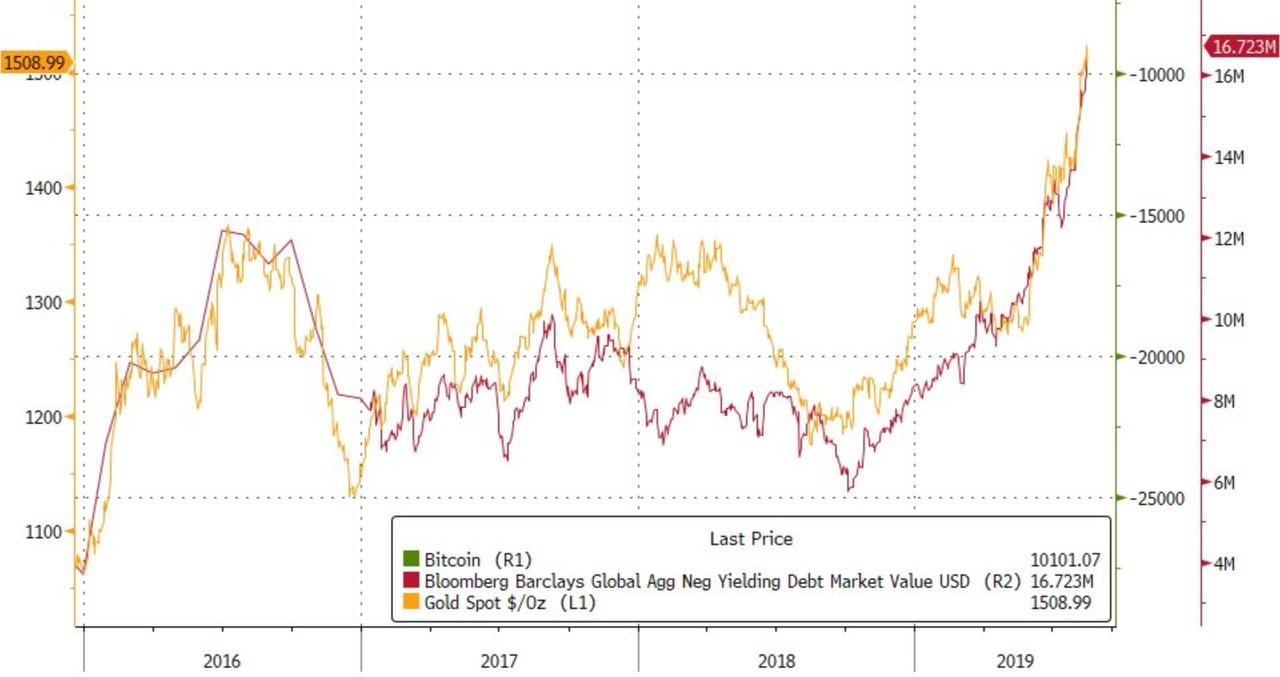 It is easy to be worried about the state of the global economy (and theoretically therefore the state of global financial markets), but, as Bloomberg’s Cormac Mullen notes, the biggest alarm bell for investors this week wasn’t the inverted U.S. yield curve; the market dislocation in Argentina was a clear signal to get out of illiquid securities soon or face exaggerated losses at the next significant meltdown.

The point isn’t to highlight the potential risk should a populist end up in the Casa Rosada, it’s to flag what can happen when event risks meet illiquid markets.

Just look at the reaction the Argentine currency. The gap between bid and offer prices surged to over 7 pesos per dollar on Monday. 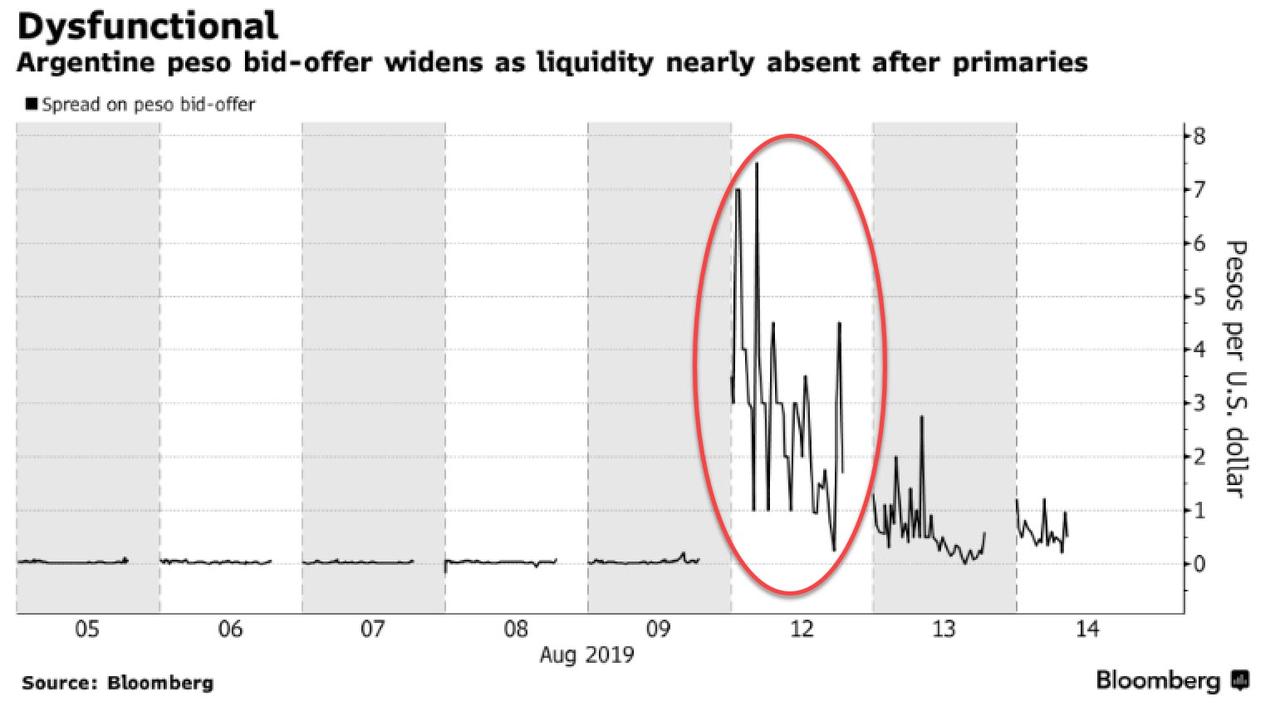 The nation’s central bank and Treasury accounted for about a third of spot-market volume. Even with the currency down over 20% since last Friday it seems traders have yet to unload the bulk of their holdings

Argentina is a poster child for the way investors were drawn to once-inconceivable assets by the hunt for yield. And in a world where algorithms and machine trading are replacing brokers and market makers, the inability to exit all but the most liquid positions smoothly has become an ever bigger risk – a liquidity breakdown was the biggest fear for quant investors in a JPMorgan survey in May.

It’s not only exotic assets at risk of a breakdown in liquidity – a spike in ultra-long Treasury futures triggered a circuit-breaker in thin trading Wednesday. The yen experienced a flash crash during Tokyo’s New Year holidays.

Warnings have grown louder in recent months about the risks fund managers are running by investing in difficult-to-trade assets — what’s happening in Argentina is a reminder to heed them.

All of which confirms our recent discussion on the looming liquidity crisis:

First it was the shocking junk bond fiasco at Third Avenue which led to a premature end for the asset manager, then the three largest UK property funds suddenly froze over $12 billion in assets in the aftermath of the Brexit vote; two years later the Swiss multi-billion fund manager GAM blocked redemptions, followed by iconic UK investor Neil Woodford also suddenly gating investors despite representations of solid returns and liquid assets, and most recently the ill-named, Nataxis-owned H20 Asset Management decided to freeze redemptions.

By this point, a pattern had emerged, one which Bank of England Governor Mark Carney described best when he said last month that investment funds that promise to allow customers to withdraw their money on a daily basis are “built on a lie.”

And now, the chief investment officer of Europe’s biggest independent asset manager agrees with him, because while for much of 2019 the biggest risk bogeymen were corporate credit, leveraged loans, and trillions in negative yielding debt, gradually consensus is emerging that investment funds themselves may be the basis for the next liquidity crisis.

“There is no point denying we are faced with a looming liquidity mismatch problem,” said Pascal Blanque, who oversees more than 1.4 trillion euros ($1.6 trillion) as the CIO of Amundi SA, according to Bloomberg’s Mark Gilbert who in a Bloomberg View piece writes that Blanque told him that the prospect of melting liquidity is one of “various things keeping me awake at night.”

Continuing the discussion of illiquid institutions, Blanque said that market making, where firms generate prices at which they are willing to either buy or sell financial products, is effectively “a public good” (or “public bad”, if it is being done by HFTs who disappear at the first sign of volatility, and them having to take on real positional risk). Of course, as that activity declines, the drop in turnover reduces the banking industry’s exposure to a collapse in prices or a surge in volatility. But the dangers are simply transferred, rather than diminished.

“Market making is falling off a cliff at the level of individual banks, but creating a systemic problem,” Blanque told Gilbert. “The banks are less risky – but the risks have been shifted to the buy side.”

Highlighting the biggest reason why liquidity has become an illusion (or rather mass delusion), is that while the dealer inventory of corporate bonds has declined by 90%…

For now, asset managers have to cope with what Blanque called “the sacred cow” – although a better phrase would be “constant risk” of allowing clients to withdraw funds on a daily basis.

“It is a bomb, given the risks of liquidity mismatch,” he warns. “We don’t know if what is sellable today will be sellable in six months’ time.”

And that, precisely, is why central banks can never again allow risk asset prices to drop: the alternative means gating not one, or two, or a hundred funds, but halting the entire market, because once everyone start selling and price discovery finally returns to a market that has been dominated by central banks for the past decade, several generations of traders and investors who have grown up without price discovery will be shocked to discover just where “fair” market prices reside.

So stop worrying about the yield curve, it’s the liquidity collapse when everyone runs for the exits that is the real existential threat.