The continued existence of the Eurozone could be under threat.

By Jim Edwards and cross-posted from Business Insider

Economists in Milan and London are debating whether Italy is carrying so much debt that it might collapse into a Greek-style financial crisis.

Their fear is that because Italy is so much bigger than Greece – and because Italy is one of the Big Three economies underpinning the eurozone – that the scale of such a crisis might be more difficult to contain this time around.

It also underscores the un-resolvable contradiction at the heart of the European Central Bank (which governs the 19 countries that use the euro as a currency): Once a country gets into too much debt, European Union austerity rules that limit government spendingmilitate to reduce that country’s economic growth.

At the same time, the ECB’s rules make it impossible for a country to exit the euro without plunging itself into the financial crisis it is seeking to avoid

The Italian economy is also burdened by a number of cultural and historic factors – corruption and inflexible labour market rules, to name just two – that hold back its productivity growth, these analysts say. 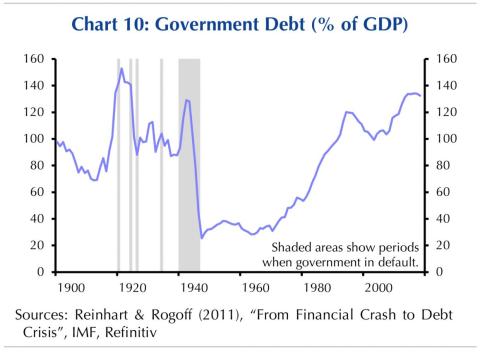 Thus Italy looks like it may become stuck in a state of “perma-recession,” according to Jack Allen, an analyst at Capital Economics.

“Italy’s economy is essentially going to flatline in the medium term,” he told Business Insider.

At the same time, Italy’s debt load is rising. It currently stands at about €2 trillion ($2.25 trillion). Debt to GDP has reached 130%, a level not seen since World War II.