But “superminis” are hot.

Sales of new passenger vehicles, as measured by registrations, fell 3.4% in March from a year earlier in the UK, the second largest auto market in Europe, as consumers shunned showrooms during what’s usually a bumper month for sales due to a number plate changeover, according to the Society of Motor Manufacturers and Traders (SMMT). The total sales of 458,054 vehicles was the worst performance of any March since 2013. 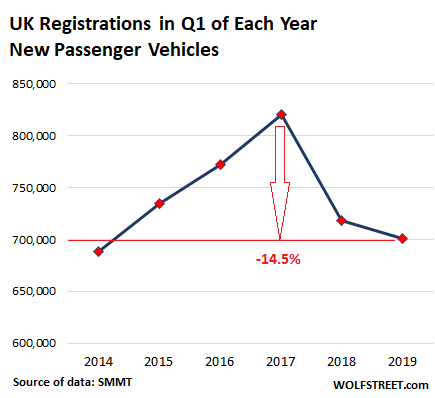 “March is a key barometer for the new-car market, so this fall is of clear concern,” said SMMT’s Chief Executive Officer Mike Hawes in a statement on Thursday. “We urgently need an end to the political and economic uncertainty by removing permanently the threat of a ‘no-deal’ Brexit.”

With the UK government and parliament having descended into a state of virtually unprecedented chaos and raw sewage reportedly leaking through the roof of the chamber of the House of Commons, the chances of that happening in the next two or three days are tiny. But Hawes can nonetheless rest assured that the political establishment on both sides of the English Channel will work tirelessly to ensure that the threat of a “no-deal” Brexit is neutralized by next Friday, when the latest Brexit deadline expires…