I can only think of one person in Washington DC who disregards diplomacy enough to task the CIA with a military style raid on a foreign embassy in a third country.

Did John Bolton, President Trump’s national security advisor, order an assault on the North Korean embassy in Spain to get an advantage in the nuclear talks?

On February 22 the embassy of the DPRK in Madrid was raided by a gang of thugs:

A group of men entered North Korea’s embassy in Madrid, bound and gagged staff, before driving off with stolen mobile phones and computers, Spanish media has reported.
…
Spanish police are investigating after El Confidencial reported a woman escaped the embassy last Friday screaming in Korean, prompting residents nearby to call police.After she reportedly revealed staff were tied up and gagged, officers knocked on the door to investigate, but were met by a man who told them everything was fine.

Soon after, two cars left the compound at high speed, one of them carrying the man who had answered the door. Police did not enter the building, but staff walked out soon after the incident.
…
Kim Hyok Chol was ambassador to Spain until September 2017, when the Spanish government expelled him and another diplomat following Pyongyang’s round of nuclear tests and missile launches over neighbouring Japan.

The name Kim Hyok Chol sounds familiar. He recently was in the news when he led the North Korean delegation in the nuclear talks:

Kim Hyok Chol, a career diplomat from an elite North Korean family, made his international debut just a few weeks ago as Pyongyang’s new point man for nuclear negotiations. In the run-up to the Feb. 27-28 summit, he has been in talks with U.S. counterpart Stephen Biegun to lay the groundwork for the meeting, taking diplomats by surprise.
…
[H]is appointment left a few people flipping through their files of cadres to find out more. Channel A News, a South Korean TV outlet, drew a circle around him in a video from a White House meeting between Trump and North Korean officials in January, asking who he was. 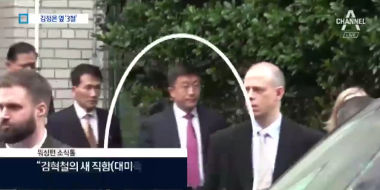 biggerPeople knew little about Kim Hyok Chol. The Bloomberg portrait of him appeared on February 22, the same day the embassy in Madrid was raided. The failed summit between Trump and Kim Jong-un in Hanoi was on February 27-28. Kim Hyok Chol was a core person in the ‘denuclearization’ talks but little was known of him.

The embassy raid was no normal thievery. There were eight people in the embassy when it was raided at 3:00 PM local time. They were bound, bags were put over their heads and some were interrogated. The thieves left with computer hardware and the cellphones of the personnel.