New troops, weapons and equipment are arriving every day.

The U.S. retreat from northeast Syria is still not happening. In yesterdays interview with CBS President Trump again said the troops would leave, but the the Pentagon is doing the opposite of retreating. 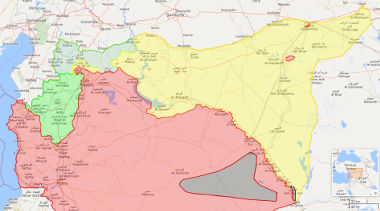 The Islamic State forces north of the Euphrates are left to holding some 4 square kilometer of ground near the border to Iraq. The few hundred ISIS fighters still alive could be killed in a day or two which would then be the right time for the U.S. to leave as President Trump announced two month ago.

But the U.S. military keeps increasing its troop numbers and supplies in the area. During the last two month the number of U.S. soldiers in northeast Syria rose by nearly 50%. Instead of the officially acknowledged 2,000 there are now at least 3,000 U.S. soldiers in northeast Syria. New weapons and equipment arrive every day. Additionally, the Syrian Observatory reports, the U.S. is bringing in a significant number of TOW anti-tank missiles and heavy machine guns even though there is no longer an apparent use for these:

[T]he International Coalition Forces brought quantities of anti-armor thermal missiles during the recent period, to their bases east of Euphrates area, in conjunction with bringing quantities of machineguns known as “DShK”, and the reliable sources confirmed to the Syrian Observatory that the range of the missiles reaches about 6 km, but the reasons for bringing these weapons was not known, especially as the “Islamic State” Organization in its last pocket at the east bank of Euphrates River is almost ended, ..
…
[T]he Syrian Observatory has documented since the US president’s decision to withdraw until the 3rd of February 2018, the entry of 1130 trucks at least, carrying equipment, ammunition, weapons, military, and logistic equipment to bases of the International Coalition east of Euphrates, ..
…
The process of entering the trucks also comes in conjunction with the arrival of hundreds of soldiers of the US Special Forces to the Syrian territory in a specific and special operation, the goal of which is to arrest the remaining leaders and members of the “Islamic State” Organization who are trapped in the remaining 4 kilometers for it east of Euphrates, ..

The American military has started withdrawing some equipment, but not yet troops, officials said on Sunday. The number of American troops in Syria has actually increased in recent weeks to more than 3,000 — a standard practice to bring in additional security and logistics troops temporarily to help protect and carry out the process of pulling out — three Defense Department officials said.

The explanation makes little sense. One does not need 1,000 additional troops to secure and remove the stocks of a 2,000 strong force deployment in mostly friendly territory…