To call the move of some 2 to 5,000 troops and their supporting civilian contractors from Syria and into new bases in Iraq a “disengagement” from the whole Middle East is obviously bollocks.

On its frontpage the New York Times delivers an utterly deranged ‘News Analysis’ of the possible end of the illegal occupation of east Syria by the United States military:

When Turkey, Iran and Russia meet to talk about the end of the war in Syria, they do so without the United States.Peace talks to solve the Israeli-Palestinian conflict have been frozen for years, but the long-awaited Trump plan to break the impasse has yet to arrive.

And now, despite conflicting messages about how and when it will happen, the United States is set to withdraw from Syria.

The withdrawal, which the military said began with equipment removal on Friday, is just the latest instance of a broader American disengagement from the Middle East that could have lasting effects on one of the world’s most volatile regions.

The U.S. has not, and likely will not, “disengage” from the Middle East. Its military has some 53,000 soldiers stationed in at last 27 bases in 12 Middle Eastern countries (not counting those in Syria).

Estimated US troop numbers stationed in the Middle East in 2017 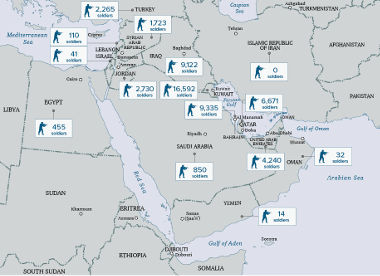 biggerBesides the troops there are a large number of civil personal supporting or replacing them:

As of July 2018 – again, excluding Afghanistan – there were 22,323 Pentagon contractors working in the CENTCOM area of operations in the Middle East including 9,762 US citizens, 12,020 third-country nationals and 541 host-country nationals. This represents a 15 per cent year-on-year increase in Pentagon contractors utilized in the region. The deployment of contractors to fulfill missions that 15 to 20 years ago would have been conducted by US troops gives the impression of a smaller American military footprint in the region.

U.S. media coverage and foreign policy discussion is more occupied with the Middle East than with any other part of the planet:

The combined population of the 15 Middle East countries covered by this paper (414.3 million) represents slightly more than 5 per cent of the world’s total population (7.6 billion). Yet, in American political and media circles, the region is the subject of vastly more than just 5 per cent of US foreign policy discussions. Indeed, outside of North Korea, China and country-specific trade issues, an American watching the national evening news, or reading a major media outlet, might imagine that the Middle East is the entirety of US foreign policy.

To call the move of some 2 to 5,000 troops and their supporting civilian contractors from Syria and into new bases in Iraq a “disengagement” from the whole Middle East is obviously bollocks…

One thought on “NYT Laments U.S. Disengagement Even As There Is None”