Spain’s residential rental market has been on a bit of a roll of late. Over the last 45 months, median rents have risen year-on-year in all but one of them: August 2018. In the hottest markets, such as Barcelona, Madrid and the Balearic Islands, rents are now higher than they were even at the dizzying peak of Spain’s madcap real estate boom. But the boom may be coming to an end.

In November, median rents fell 0.5% from October, according to the real estate agency Fotocasa. On a year-by-year basis, rent increases eased to a meager 0.6%. Note the year-over-year gains of around 10% in 2017 (chart via Fotocasa): 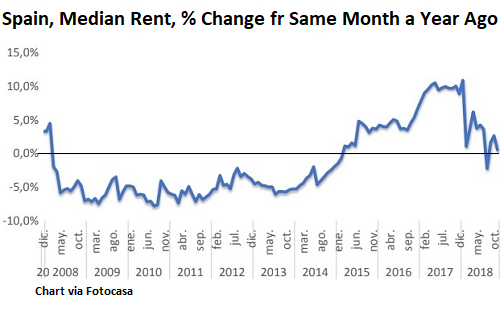 “The Fotocasa Price Index continues to show a clear tendency toward a stabilization of rents across large swathes of the country,” says Beatriz Toribio, Fotocasa’s director of research. “A year ago the median rent was rising on a year-on-year basis in all 13 autonomous regions. Now it only does so in two.”

Those two regions are Madrid, where rents rose 1.3% year-over-year in November, and the Basque Country (0.5%). In four regions, rents slumped between 4.4% and 5.1%: Castilla y Leon, Extremadura, Navarre, and La Rioja. Even in the prime markets of Catalonia and the Balearic Islands, rents fell…

One thought on “Multifamily Rentals Were Best Asset Class in 2018 in Spain, But Now Rents Are Heading South”