The initiative claims to be an independent Non-Government Organization, but in reality is financed by the British government, NATO and other state donors.

Crosss-posted from Moon of Alabama

The British government-financed Integrity Initiative is tasked with spreading anti-Russian propaganda and thereby with influencing the public, military and governments of a number of countries. What follows is a contextual analysis of the third batch of the Initiative’s internal papers which were dumped by an anonymous source yesterday.

Christopher Nigel Donnelly (CND) is the co-director of The Institute for Statecraft and founder of its offshoot Integrity Initiative. The Initiative claims to “Defend Democracy Against Disinformation”. 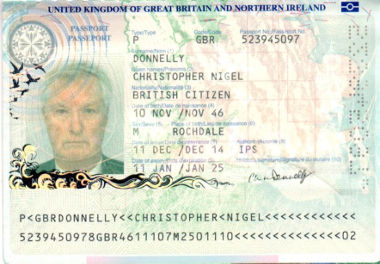 The Integrity Initiative does this by planting disinformation about alleged Russian influence through journalist ‘clusters’ throughout Europe and the United States.

Both the Institute as well as the Initiative claim to be independent Non-Government Organizations. Both are financed by the British government, NATO and other state donors.

Among the documents lifted by some anonymous person from the servers of the Institute we find several papers about Donnelly as well as some memos written by him. They show a russophobe mind with a lack of realistic strategic thought.

There is also a file (pdf) with a copy of his passport:

From his curriculum vitae (pdf) we learn that Donnelly is a long time soldier in the British Army Intelligence Corps where he established and led the Soviet Studies Research Centre at RMA Sandhurst. He later was involved in creating the US Army’s Foreign Military Studies Office (FMSO) at Ft. Leavenworth. He worked at the British Ministry of Defence and as an advisor to several Secretaries General of NATO. He is a director of the Institute for Statecraft since 2010. Donnelly also advises the Foreign Minister of Lithuania. He is a “Security and Justice Senior Mentor” of the UK’s Stabilisation Unit which is tasked with destabilizing various countries. He serves as a Honorary Colonel of the Specialist Group Military Intelligence (SGMI).

During his time as military intelligence analyst in the 1980s Donnelly wrote several books and papers about the Soviet Union and its military.

Donnelly seems to be obsessed with the ‘Russian threat’ and is determined to fight it by all means.  His paranoia is obvious in a “private – confidential” report by the Statecraft Institute on The Challenge of Brexit to the UK: Case study – The Foreign and Commonwealth Offices(pdf):

Our problem is that, for the last 70 years or so, we in the UK and Europe have been living in a safe, secure rules-based system which has allowed us to enjoy a holiday from history.
…
Unfortunately, this state of affairs is now being challenged. A new paradigm of conflict is replacing the 19th & 20th Century paradigm.
…
In this new paradigm, the clear distinction which most people have been able to draw between war and peace, their expectation of stability and a degree of predictability in life, are being replaced by a volatile unpredictability, a permanent state of instability in which war and peace become ever more difficult to disentangle. The “classic” understanding of conflict being between two distinct players or groups of players is giving way to a world of Darwinian competition where all the players – nation states, sub-state actors, big corporations, ethnic or religious groups, and so on – are constantly striving with each other in a “war of all against all”. The Western rules-based system, which most westerners take for granted and have come to believe is “normal”, is under attack from countries and organisations which wish to replace our system with theirs. This is not a crisis which faces us; it is a strategic challenge, and from several directions simultaneously.

In reality the “Western rules-based system”, fully implemented after the demise of the Soviet Union, is a concept under which ‘the west’ arbitrarily makes up rules and threatens to kill anyone who does not follow them. Witness the wars against Serbia, the war on Iraq, the destruction of Libya, the western led coup in Ukraine and the war by Jihadi proxies against the people of Syria and Iraq.

None of these actions were legal under international law. Demanding a return to strict adherence to the rule of international law, as Russia, China and others now do, it is not an attempt to replace “our system with theirs”. It is a return to the normal state of global diplomacy. It is certainly not a “Darwinian competition”…

2 thoughts on “The ‘Integrity Initiative’ – A Military Intelligence Operation, Disguised As Charity, To Create The “Russian Threat””