Trump’s foreign policy is run by neo-conservatives and they are again, like when they faked intelligence to lay the grounds to invade Iraq, creating huge damage.

CNN reports that White House chief of staff John Kelly is expected to resign soon. There have been similar rumors before, but this time the news may actually be true. That is bad for Trump and U.S. policies. Kelly is one a the few counterweights to national security advisor John Bolton. His replacement will likely be whoever Bolton chooses. That will move control over Trump policies further into the hands of the neo-conservatives.

It was Bolton who a week ago intentionally damaged U.S. relations with China.

The U.S. Justice Department arranged for Canada to arrest the chief financial officer of Huawei, Meng Wanzhou, over alleged U.S. sanctions violations with regards to Iran. The case is not over the sanction Trump recently imposed, but over an alleged collision with the sanction regime before the nuclear deal with Iran. The details are still unknown.

Meng Wanzhou is a daughter of the founder and main owner of Huawei, Ren Zhengfei, and was groomed to be his successor. The company is extremely well regarded in China. It is one of its jewel pieces and, with 170,000 employees and $100 billion in revenues, an important political actor.

The arrest on December 1 happened while president Trump was negotiating with president Xi of China about trade relations. Trump did not know about the upcoming arrest but Bolton was informed of it:

While the Justice Department did brief the White House about the impending arrest, Mr. Trump was not told about it. And the subject did not come up at the dinner with Mr. Xi.Mr. Trump’s national security adviser, John R. Bolton, said on NPR that he knew about the arrest in advance, ..

Bolton surely should have informed Trump before his dinner with Xi, in which Bolton took part, but he didn’t. 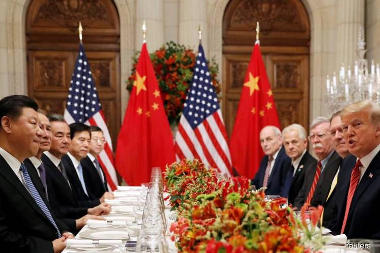 It was a trap. The arrest is a public slap in the face of China and to Xi personally. It will not be left unanswered. Whatever Trump may have agreed upon with Xi is now worthless. John Bolton intentionally sabotaged the talks and the U.S. relations with China.

Huawei is Chinese manufacturer of telecommunication equipment. It is the world leader in 5G wireless technology that will soon replace the wireless networks we know today with much higher data capacities, faster response times and many new features.

After Huawei was founded in 1987 it copied technology from Cisco and other U.S. manufacturers. Today it is a technology power of its own. It is one of the leading inventor in the 5G field and over the last years filed thousands of patents related to it. Its success in the field is genuinely self made:

With 5G, Chinese companies started developing know-how early. Huawei has invested $600 million in 5G research since 2009, according to a company spokesman, and has committed an additional $800 million for this year. The company is testing 5G equipment with European telecom operators including BT, Deutsche Telekom and Vodafone.As of early 2017, 10 percent of the 1,450 patents essential for 5G networks were in Chinese hands, according to analysts with Jefferies, who wrote that they expected the figure to rise. That number includes intellectual property rights held by Huawei; another Chinese equipment maker, ZTE; and others.

Huawei’s share in 5G patents has since risen further. Right now it is the only true 5G supplier that can build a complete network…