Why the 99% of us are falling farther behind

If you suspect society is unfair, that there’s a different set of rules the rich live by, you’re right.

I’ve had ample chance to witness first-hand evidence of this in my time working on Wall Street and in Silicon Valley. Simply put: our highly financialized economy is gamed to enrich those who run it, at the expense of everybody else.

A recent experience really drove this home for me.

Having received my MBA from Stanford in the late 90s, I remain on several alumni discussion groups. Recently, a former classmate of mine, who now runs her own asset management firm, circulated her thoughts on how today’s graduating students could best access an on-ramp to the ‘money river’.

The money river is the huge tsunami of investment capital sloshing around the globe, birthed by the historically-unprecedented money printing conducted by the world’s central banks over the past decade. Since 2008, they’ve more than tripled their collective balance sheet: 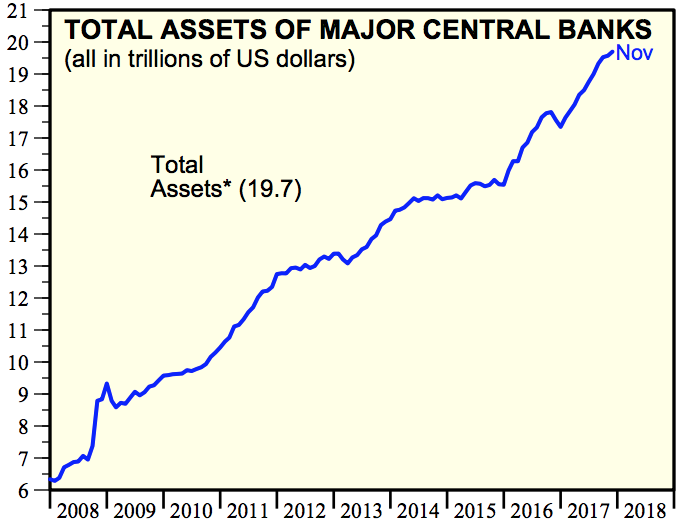 The $13+ trillion in new thin-air money issued to achieve this is truly staggering. It’s so large that the human brain really can’t wrap around it. (For those who haven’t seen it, watch our brief video How Much Is A Trillion? to better understand this.)

But suffice it to say, all that money has to go somewhere. And it first goes into the pockets of those with closest access to it, and of those who direct where it flows.

In the context of MBA graduates working in finance, accessing the ‘money river’ often follows this recipe:

Let’s put a little math behind this, with real-world numbers based on another classmate of mine who followed this recipe. After graduating, he went to work for a prestigious private equity firm, spending nearly a decade there as a fund manager. He then left to start his own fund.

Since he had invested in scores of ventures and funds while working for the private equity firm, he had amassed plenty of industry insiders who knew they had to reciprocate when it came time for him to hang out his own shingle, because “that’s how the game is played”. You help me when I need it, and I’ll do the same for you.

Only a few weeks after announcing the formation of his new fund, he had raised $100 million for it. At his 2% management fee, that gave him an annual salary of $2 million no matter how the fund performed. And with the standard carried interest percentage, he had substantial additional upside of 20% of any profits the fund may take in the future.

Since forming this fund nearly ten years ago, the financial markets have been on a historic bull run, with hardly any corrections along the way. This is primarily due to the trillions in new money provided by the world’s central banks mentioned above. So, it’s little surprise that my former classmate’s fund now stands at over $1.1 billion in assets under management.

That’s now a $20 million annual management fee. Plus 20% on (conservatively estimating) hundreds of millions of gains made along the way.

Not bad work if you can get it.

No Fund For You!

But that’s a big part of my point here. The 99% don’t have a key past the velvet rope to access the money river.

Look, I don’t begrudge this guy his success. Well, maybe I do; but it’s not personal — I know him well enough to say that for certain he’s extremely smart, bold and hardworking. But he’s benefiting from being in the Big Club that George Carlin railed about. The rest of us ain’t in that club, and won’t ever be. But our futures are being determined — or more accurately put, undermined — by it…

One thought on “Drowning in the Money River”