By James DiEugenio and cross-posted from Consortium News 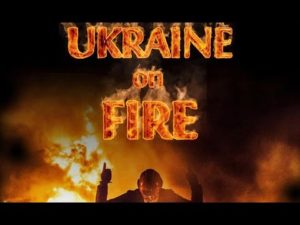 It is not very often that a documentary film can set a new paradigm about a recent event, let alone, one that is still in progress. But the new film Ukraine on Fire has the potential to do so – assuming that many people get to see it.

A good example of this would be Peter Davis’s powerful documentary about U.S. involvement in Vietnam, Hearts and Minds. By 1974, most Americans understood just how bad the Vietnam War was, but through the combination of sounds and images, which could only have been done through film, that documentary created a sensation, which removed the last obstacles to America leaving Indochina.

Ukraine on Fire has the same potential and could make a contribution that even goes beyond what the Davis film did because there was very little new information in Hearts and Minds. Especially for American and Western European audiences, Ukraine on Fire could be revelatory in that it offers a historical explanation for the deep divisions within Ukraine and presents information about the current crisis that challenges the mainstream media’s paradigm, which blames the conflict almost exclusively on Russia.

Key people in the film’s production are director Igor Lopatonok, editor Alex Chavez, and writer Vanessa Dean, whose screenplay contains a large amount of historical as well as current material exploring how Ukraine became such a cauldron of violence and hate. Oliver Stone served as executive producer and conducted some high-profile interviews with Russian President Vladimir Putin and ousted Ukrainian President Viktor Yanukovych.

The film begins with gripping images of the violence that ripped through the capital city of Kiev during both the 2004 Orange Revolution and the 2014 removal of Yanukovich. It then travels back in time to provide a perspective that has been missing from mainstream versions of these events and even in many alternative media renditions…

One thought on “A Documentary You’ll Likely Never See”